Redding in Northern California is not only within the fantastic forests of the region and close to such impressive natural monuments like the Lassen Volcanic Natural Park but at the Redding Municipal Airfield as well home to a fire fighter base. The station is owned by the federal Forest Fire Service but used as well by the state run California Fire Service (widely known and abbreviated as CAL Fire). As a consequence, aircraft from both services operate from the base and help fighting the fires.

Redding as a base was used by the Army Air Corps for training (P-39 Airacobras pilots) and then as refuelling and maintenance base during the Second World War until it was transferred to the Community of Redding in 1946. As the area is threatened with forest fires a firefighting station was created on the airfield. To fight these forest fires a fluid is used which is not water but a specific retardant. This retardant itself is based on a salt mixed with water – the salt is delivered in plastic big bags of one tonne weight – ample supply is provided to ensure constant supply. The federal Forest Fire Service mixes the salt in specific chambers with water which thus transforms into a slime that is, once the desired fluidity is ensured, pumped into the storage tanks. In front of the tanks an operator station controls the pumps to ensure quick refilling of the Aircraft.

The base in Redding is equipped with a total of four refuelling pits, two to the left and two to the right of the operator station. Due to the high speed of the refuelling operation always only one aircraft per side is refilled with retardant. Each of the pits is appropriately equipped with pumps and all necessary equipment, but as well with a gully to avoid pollution of the environment if some of the slime drops on the side. Once loaded on the aircraft the firefighters drop it according to the instructions given by the captain – the slime once dropped disappears after a while, but stays long enough to allow the surveillance teams and ground based forces to track the exact locations of the different Drops.

During firefighting operations there is a clear hierarchy regarding the different aircrafts used. On top the OV-10 Bronco (and occasionally the King Air) performs the command and control element of the mission. Flying in 3000 feet and staffed with a pilot and a captain normally the pilot flies the aircraft whereas the captain coordinates all other aircraft flying below him and coordinates with the ground. In ASV operation mode (Aerial Super Vision) the pilot takes as well the task of coordinating the smaller aircraft whereas the captain controls larger aircraft like Bae146. Flying below the OV-10 Bronco at a height of 2000 feet then will be the S-2 Trackers which perform drops of their 1200-1300 Gallons of retardant (refilled in less than 5 minutes). The speed and capacity of the Tracker make the aircraft as well the first choice as first responder after a new fire is identified. Further below at 1500 feet you might then have various helicopters combatting smaller fires or airframes with special missions like the Cobra from the federal Forest Fire Service which performs the role of hunting and searching for smaller fires – for the role the aircrafts flies low in the smoke and uses its electro-optical turret and FLIR (forward looking infra-red).

CAL Fire subcontracts as well larger aircraft during the fire season – in 2018 this was a BAe146 from Neptune Aviation home-based in Missoula, Montana. Due to size the capacity is significantly higher with 3000 Gallons. The aircraft is stripped from all unnecessary equipment to reduce weight and to allow the maximum capacity for the firefighters.

To complete the fleet of CAL Fire next to Bronco and Tracker the service owns several King Airs to train its captains and pilots – sometimes the aircraft are used as well in the Observer role replacing the Bronco. The King Airs, like all other aircraft, are bought second hand from the US Military and afterwards refurbished. The same applies as well to the federal Forest Fire Service (as example: in the Cobra the gun in the nose turret is replaced with the turret including the camera and sensors).

In the future the CAL Fire Service will operate as well larger aircraft – between five and seven C-130 Hercules, all former US Military, will be acquired and split in groups of three and stationed in northern and southern California.

In terms of aircraft the following airframes could be seen during the visit on the base: 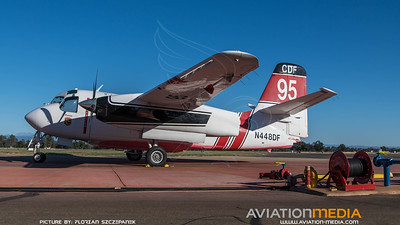 Previous military serial BuNo 152347, built as S-2F1 in 1956, retired by the US Navy in 1976, 2004 rebuilt and refurbished (piston engine to turbo-prop) and delivered to CDF California Department of Forestry and Fire Protection. 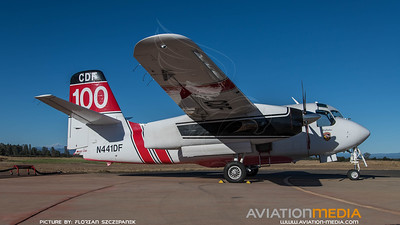 Previous military serial BuNo 152808, built as S-2F1 in 1956, retirement date by the US Navy unknown, 2003 rebuilt and refurbished (piston engine to turbo-prop) and delivered to CDF California Department of Forestry and Fire Protection.

Previous military serial 83-24194, built in 1983 for the United States Army, acquired by United States Department of Agriculture in 2004, transferred to United States Forest Service in 2011.

We would like to thank the staff from CAL Fire and the other services on base for the visit on short notice and the kind hospitality.