Greece features several events relevant for aviation enthusiasts every year. Among these, the open day hosted every year around the national day allows access to bases – but there is not always flying. As journalist you can register for media days, mainly Iniochos at Andravida air base – but this is not a family event but a military exercise with corresponding press coverage. And finally there is Athens Flying Week. This show, run since 2017 at Tanagra base, is the biggest airshow in Greece and attracts people from Greece and abroad. The show is relatively young, held for the first time in 2012 Tatoi airbase – and growing since.

As aviation photography – and especially military aviation photography – is not really appreciated in Greece if you perform it without explicit approval, this show is one of the opportunities to see various elements from the Hellenic Air Force (HAF), the Hellenic Navy (HN) and Hellenic Army Aviation (HAA) next to paramilitary elements, guests from various countries and civil participants. In addition, the base is conveniently oriented for photography, with an east-west oriented runway and the spectators positioned in the south.

Tanagra air base itself has a mixed role, as it houses the HAF 114 the Combat Wing equipped with Mirage 2000, which main role is the Defence of Athens. Besides, the base is home of large maintenance, repair and overhaul facilities of Hellenic Aerospace Industries (HAI), which addresses all large aircraft of the Greek Air Force and other Greek governmental organisations (like C-130, ERJ-135, ERJ-145 AWACS, CL-215, CL-415, …). Although two runways exist, only the northern wider one was operationally used during the show. The two squadrons of the base operate from shelter areas in the southeast and northwest – and the HAI facilities are located at the south-eastern end of the airfield. During our visit several aircraft were parked on various parking areas across the base waiting service. 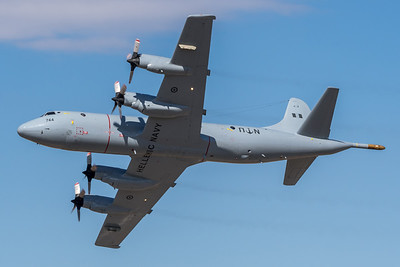 The show uses as public area a large open space south of the southern runway, which was used as taxiway for display aircraft. A small part of the shelter area to the southeast was integrated in the showground as well, being used to park some visitors. Quite conveniently, all cars access the base and park directly behind the public showground. From there you had only a short walk to the public area, offering in various tents souvenirs of all kinds, merchandise from the participating actors and military squadrons and of course foods and drinks. 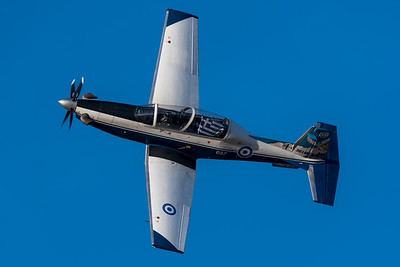 The static display included a mixture of Greek military aircraft and foreign military guests. The Hellenic Air Force presented themselves with an iconic F-4, arriving in style with a touch and go on Friday. Furthermore, a T-6 Texan trainer and a C-130 Hercules were accessible to the public. From the collection of historic aircraft, a Mirage F1 and an F-86 – both in colourful special anniversary paint schemes – were accessible as well. The Hellenic Navy presented an Augusta-Bell AB-212 ASW and an S-70B Seahawk helicopter, supported by an already inactive Alouette III in the highly attractive blue colour scheme. The Hellenic Army Aviation flew in an AH-64 Apache and – to the delight of many attendees – an UH-1N Huey as well an CH-47 Chinook equipped with a bambi bucket for the fight against forest fires. To complete their airframe review we have to mention as well on of their first OH-58D Kiowas, which are a new acquisition for the branch. 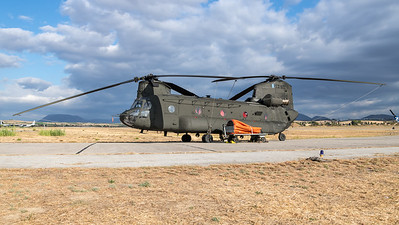 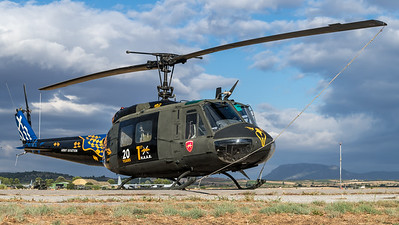 To complete the static collection several foreign visitors arrived in the days preceding the show. Austria sent two Saab 105 – showing one in the static and displaying the other one in the flying. Italy sent an MB-339 and an M-346, both of them trainer aircraft, presumably of not only sending as guests but as well as suggestion to replace the ageing T-2 Buckeyes of the HAF. Finally, the United States sent a C-130 Hercules from Ramstein Air Base and luckily choose the airframe marked with the Invasion Stripes in memory of the anniversary of the Invasion in Normandy 1944.

The flying display can be summarised in four blocks. Of course the Hellenic military and as well para-military forces took a significant share.

The Hellenic Air Force displayed a mock base attack by two F-4 Phantoms, a simulated dog-fight by a Mirage 2000 with an F-16 and of course the two solo displays with Zeus (F-16) and Deadalus (T-6). The later-one flew with two different specially marked aircraft on Saturday and Sunday – one with the airframe marked with Deadalus, the other one celebrating a squadron anniversary. 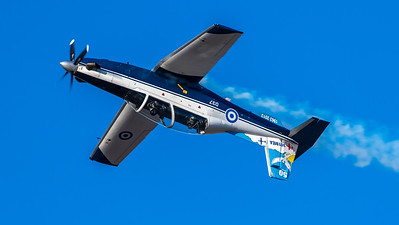 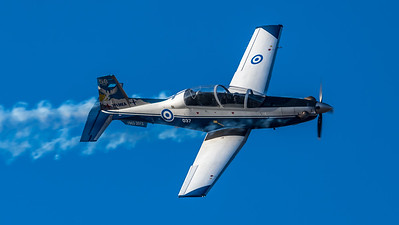 The Hellenic Navy interchanged their displays between the AB-212 ASW, the S-70B and a P-3B Orion, the later-on landing at the end of the demo and positioning in the middle of the runway – with the two helicopters hovering next to it. 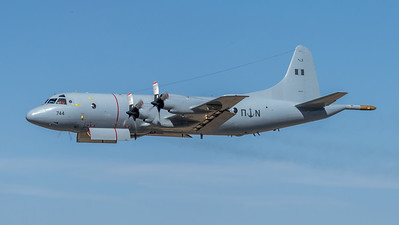 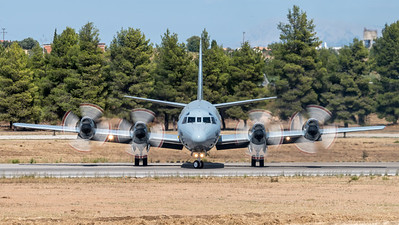 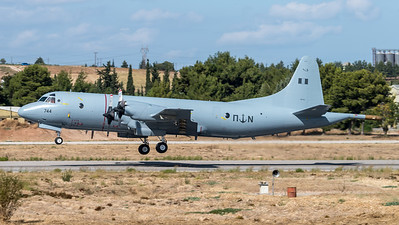 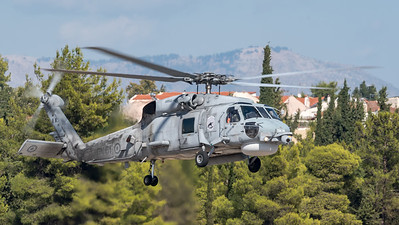 The Hellenic Army Aviation centred their display on the AH-64 Apache. Using different aircraft on the show days, one received as well special markings with a large running horse on the side of the fuselage. 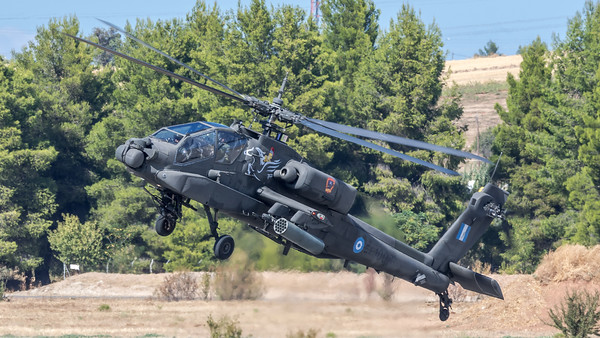 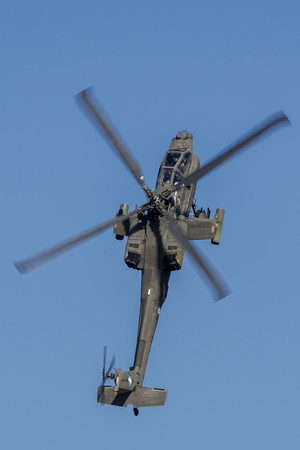 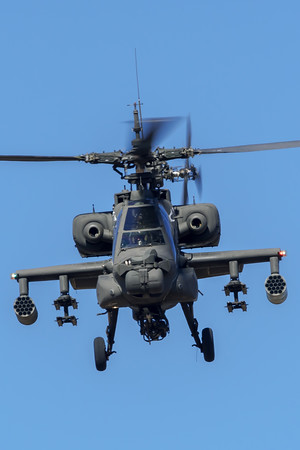 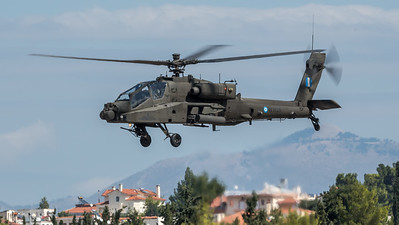 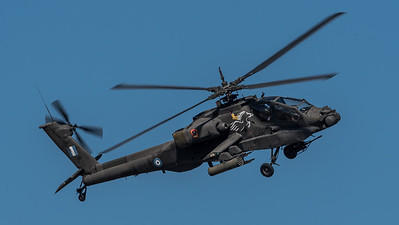 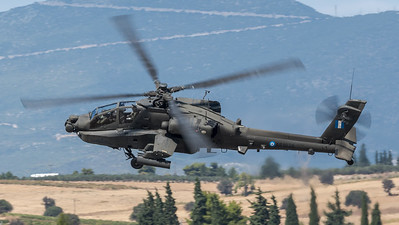 Besides the direct military forces, the firefighters showed their aircraft as well. Summarising the training and show days you could see the Super Puma, the Dromedar and the CL-215 and CL-415 Super Scoopers.

In the second block we can summarise the foreign military guests with the Austrian Saab 105, Vador from Belgium and the Patrouille de France. As the Dark Falcon airframe flown by Vador had a technical issue, the team arrived with one aircraft marked with Invasion stripes and a special tail commemorating the anniversary of the invasion in Normandy 1944 and a standard F-16. The Austrians didn’t want to stand back and arrived with one tiger marked aircraft and as well a standard one. The Patrouille de France arrived only on Sunday morning due to other commitments and gave a spirited display in the setting sun in the evening. In terms of support for their aircraft the Belgians sent an ERJ-145 (as well with special tail) and the French an A400M – but none of them stayed for the show. Finally, we have to mention the Royal Jordanian Falcons, which aircraft lead us to the next segment in the show. 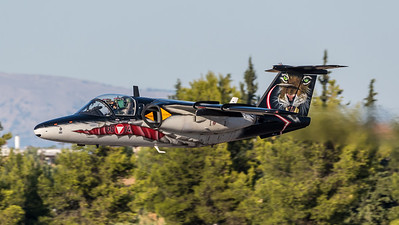 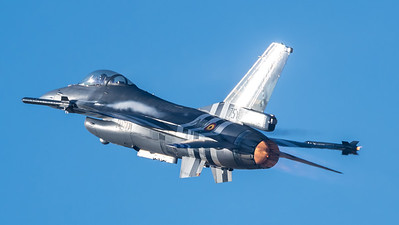 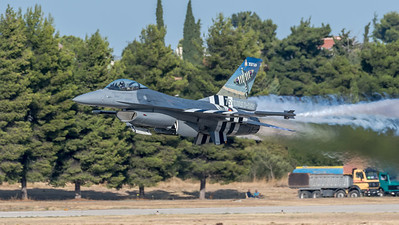 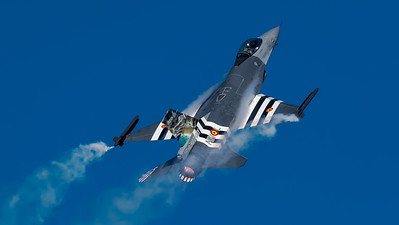 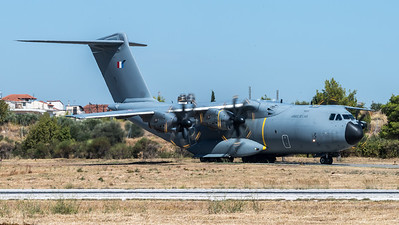 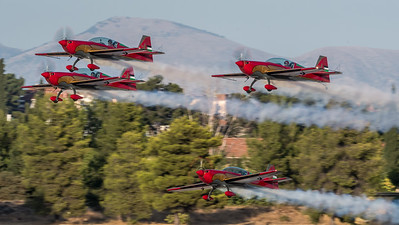 The third block can be made up by various aerobatic aircraft and as well an aerobatic helicopter display. Participants included Dutch Rush with a Su-26, Black Wolf with an Extra 330SC and The Silver Chicken with a CAP-21 to name some. In addition, the Vostok team has to be mentioned, using an Airbus Helicopter H120. 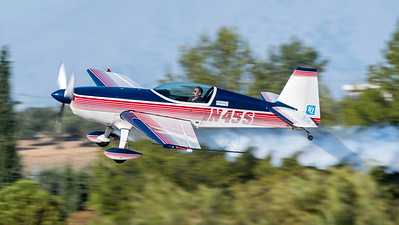 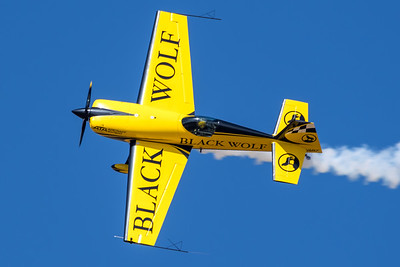 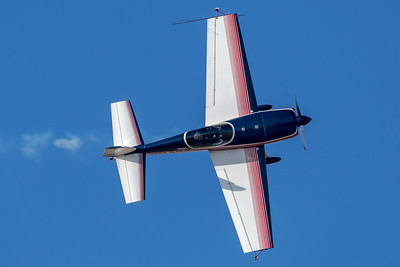 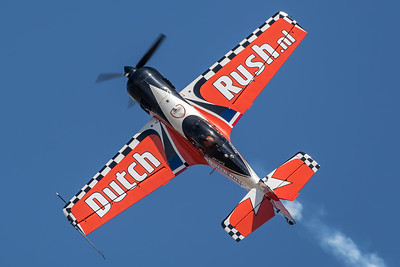 Lastly we have to mention the participation of the Flying Bulls, who enjoyed the crowds with their historic aircraft. The F-4U Corsair and the Bo-105 thrilled the crowds by sound and/or aerobatics, whereas the Glider kept silent but painted figures and loops with smoke in their air. To complete this impressive participation, the DC-6B flew on every day, again enjoying the attendees with the impressive sight, chrome and the fantastic sound of its four piston engines.

As a special surprise, both days saw as well flypasts of aircraft of Olympic or Aegean airlines. Especially the low pass by the Aegean A321 low and fast in front of the crowds was very remarkable. 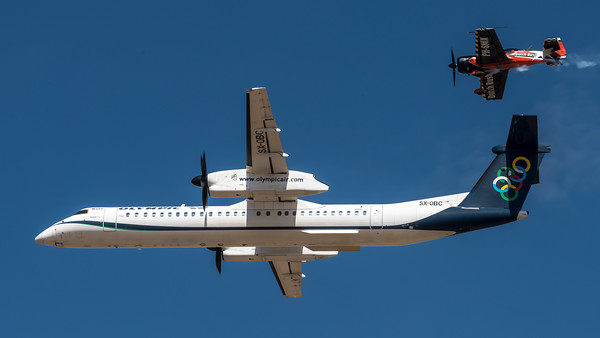 Summarising the show, we have to conclude that Athens Flying Week does not need to stand back as the event is enjoyable and well organised. The overall experience is quite comfortable as it is busy – but not crowded like other events. Furthermore, you get to see airframes and displays of especially the Hellenic Armed Forces, which you can barely see outside Greece. We would like to thank the organisers of Athens Flying Week for the enjoyable days, and wish all the best for many shows to come.