The Coastguard itself does not operate the helicopters and aircrafts, but all are operated by other subcontracted services. All the helicopters are run by Bristow helicopters since 2015 (contract duration currently set till 2025) and foresee operation of each two helicopters at ten Coastguard stations around UK. To ensure that there are always operations possible, two different helicopters were chosen to fulfil missions. On the one side these are 12 Sikorsky S-92, 10 of them operating in pairs from five bases – and an approximate same number of Agusta Westland AW189 helicopters, 10 of them operating from five other bases. The remaining helicopters are kept as spares. Previously, until the availability of the AW189 (the airframe at RIAT was less than one year old), AW139 helicopters were used as an interim measure.

In terms of aircraft the service uses various propeller driven Cessnas (310, 420, F406, 404). At RIAT 2019, a Reims-Cessna F406 with special radar equipment for the pollution control mission, showed up and was parked next to the two helicopters. All aircraft of HM Coastguard are operated by RVL Group out of their base at East Midlands airport. In comparison to the two fairly new helicopters the F406 is a real old airframe – built in 1987 with serial number 20.

During the Sunday morning, we had the chance to get the operations of the helicopters explained in detail by the winchman, operating in the S-92 from the station in Caernarfon in Wales. Both aircraft are using the same hook and hoist systems and share as well the other special equipment like the search light / infrared turrets and other equipment. In terms of performance we got the explanation that a stroboscope light (as e.g. attached to life jackets in aircraft) is visible to the equipment and their night vision goggles from 20 miles and more – and a flashlight up to 8 miles. Inside the S-92 in the cabin on the port side an additional tank is installed to add range – the tank is covered with a rack with all the medical equipment. In the middle of the fuselage next to the rack is the elevated platform to position the Stretcher, made of Titanium to reduce weight. The starboard side is occupied with several foldable chairs which can be easily removed. In front of this medical station is on the port side the operator station with the screens and consoles to scan the ocean – either by normal camera or infrared / night vision. The two pilots fly the aircraft from the glass cockpit.

The S-92 airframe itself offers a lot of flexibility due to rear cargo door – which allows quick on-and-off loading and boarding of e.g. mountain rescue climbers. On the outside in the two sponsons port and starboard next to the wheels the main part of the fuel is carried – and the sponsons can be discharged in case of emergency to ensure separation of the main part of the fuel from the crash site. The front of the sponsons is used to carry one life raft each. One additional key advantage emphasized was the possibility to stand nearly upright in the S-92 – which is not possible in the other type.

The AW189 in comparison offers a huge central area, as in normal operations only the seat row at the rear of the fuselage is installed (from up to four set rows possible). The central open space allows easily to position the stretcher. The operator stations and the necessary equipment is in this aircraft installed on the rear port side, screens and consoles attached either to the port fuselage or foldable from the ceiling of the cabin. Additional equipment can be stored behind the two middle seats in the rear row.

Quite interesting, the two airframes, although appearing different in terms of size, nearly provide the same capacity if used in passenger transport (mainly for the oil and gas industry) – with the S-92 seating 18 passengers in 6 rows with 3 passengers and an aisle whereas the AW189 seats 16 passengers in 4 rows of 4 passengers boarding through the huge side doors. 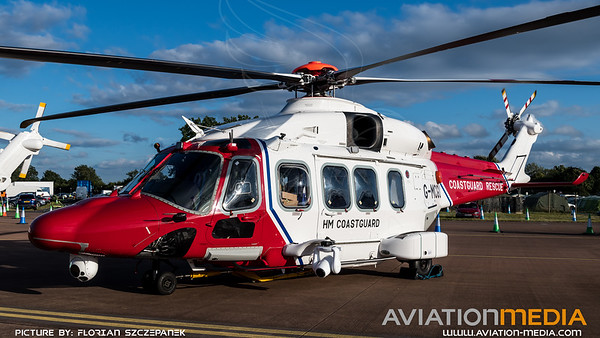 In terms of endurance the S-92 offers slightly longer “legs”, but the service displayed during the show as well a Schiebel S-100 currently in test. The key advantage for the service in operating this unmanned helicopter is the capability to transfer the search part to the drone and focus on the challenging rescue operation. Thus the crew is not potentially exhausted during the rescue as if after a two hour search with NVGs in storm on the ocean. Furthermore, the drone has a 10 hour endurance – minimum double or triple the time of the helicopters. The current experiments look very promising, but will require in addition to the pure technical and operational tests as well a re-writing of flight rules and regulations regarding drone operations.

After seeing all the equipment and getting all the explanations, we have been clearly impressed by the technology in use – but even more by the passion expressed by the crews and their interest to become better and better in their main mission – saving the life of people in need on the coast and beyond. We would especially express a BIG “Thank You” to the winchman of the S-92 from Caernarfon station attending RIAT at Fairford, who took the time to explain and review everything with us.