The Japanese Self Defence Forces, abbreviated with JASDF, are among one of the last operators of the iconic F-4 Phantom and its versions. Many other countries, who previously operated this classic aircraft have already retired it – so in most cases you can see it only in a Museum and not in action anymore. Thus it was of course welcomed to learn that the Airbase in Hyakuri, Japan, where all the remaining squadrons of the Phantom have been co-located, will host an airshow on the first day of December 2019. 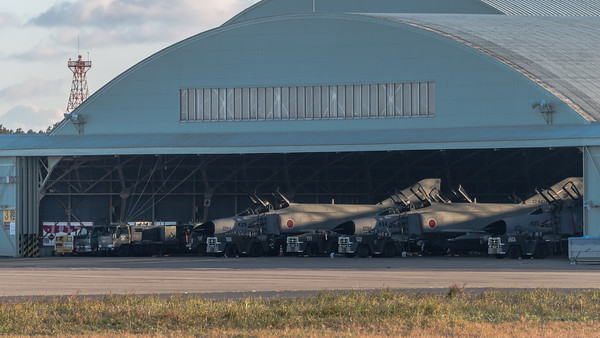 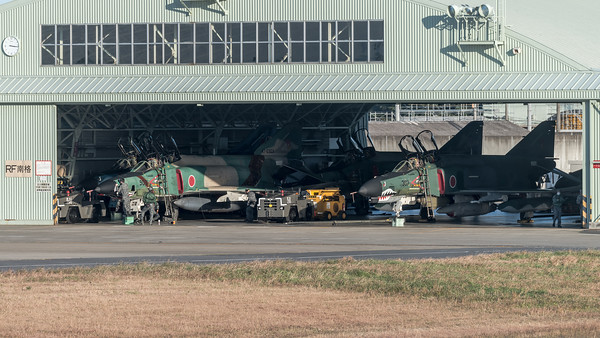 The Japanese Air Force acquired in total 140 F-4EJs, of which nearly all except two were built by Mitsubishi Heavy Industries in Japan, and 14 RF-4Es for Reconnaissance Duty – for a total of 154 aircraft. One of the F-4EJ was in the end the last Phantom every built, rolling of the assembly line in 1981. 96 of these aircraft were upgraded to F-4EJ Kai standard in the eighties, comparable modifications have been done as well to the RF-4Es renaming them RF-4J Kais. All of these aircraft equipped seven operational – six fighter and reconnaissance – and one test squadron – in Japanese hikotai: 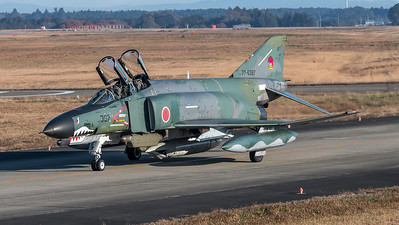 301st – the frogs – was the first to receive the F-4EJ in 1973, located at that time in Hyakuri. It relocated in 1984 to Nyuatabaru and then back to Hyakuri in 2016. It is the last operational F-4EJ hikotai in the JASDF and is expected to fly the aircraft until end of March 2020 when the fiscal year ends. Afterwards the squadron is scheduled to relocate to Misawa for conversion to F-35.

302nd – the hawks – received its Phantoms in 1974, based in Chitose. This hikotai moved to Naha in Okinawa in 1985 and to Hyakuri in 2008. The 302nd closed the chapter of using Phantoms end of March 2019 and is in conversion to the F-35. For this process the squadron relocated to Misawa. 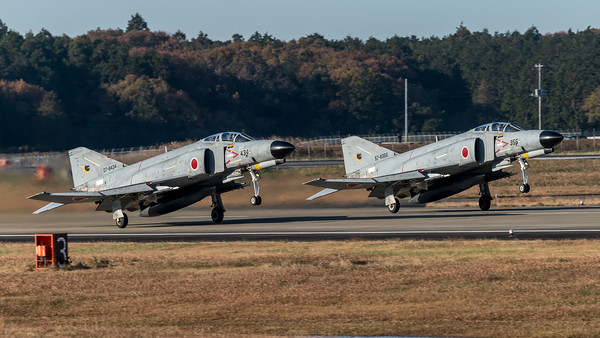 303rd – the dragons – started to operate F-4EJ in 1977 from its base in Komatsu. After only ten years of operating the Phantom it converted to F-15Js. The squadron still flies today from Komatsu.

304th – the Tengus (comparable to a Goblin) – flew the Phantom from 1977 till from its base in Tsuiki. In 1990 this hikotai turned in their F-4EJs and received as well Eagles. Today the squadrons F-15Js take off from Naha in Okinawa. 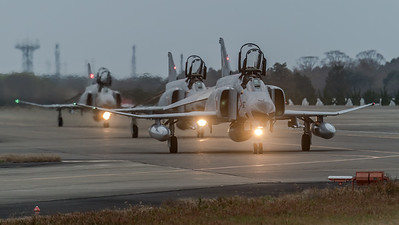 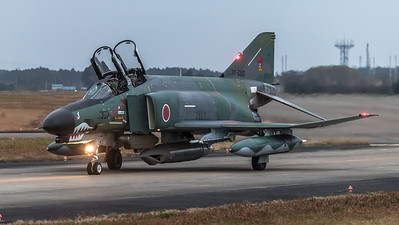 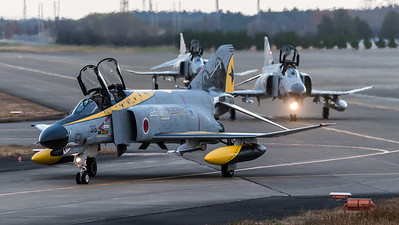 306th – the Golden Eagles – was the last operational squadron to start using F-4EJs – flying with them from 1981 to 1997 from Komatsu. It converted as well to F-15Js and operates them at the same base till today. 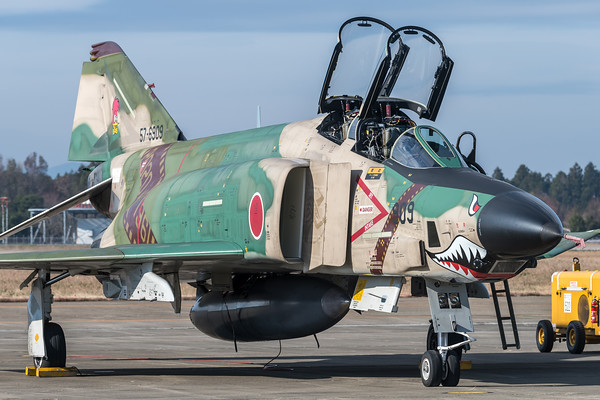 501st – the Woodpeckers (using the icon of the American cartoon Woody Woodpecker) – received their RF-4Es from 1974 and always remained in Hyakuri. The strength of the squadron was further enlarged with the conversion of 15 F-4EJs (7) and F-4EJ Kais (8) to RF-4EJ Kai standard in the early nineties. These modified RF-4EJ Kais can be easily identified as the conversion didn’t include the installation of the radar nose but only the other equipment (pods, internal equipment, cockpit etc.). The reconnaissance squadron will end operations with the Phantom as well at the end of March 2020 – same time as the neighbouring 301st fighter squadron – but will disband at the same time. The current plan to replace the reconnaissance capabilities is based on a radar pod for the F-15Js. But there are as well voices speaking about re-equipping the 501 with F-15s - and staying with these new aircraft in Hyakuri.

The Test Squadron at Gifu air base operates as well F-4EJs till today. It can be assumed that this usage will end as well with the retirement of F-4JS and RF-4Es/RF-4EJ Kais in the operational squadrons end of March 2020. 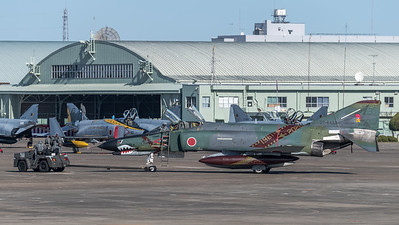 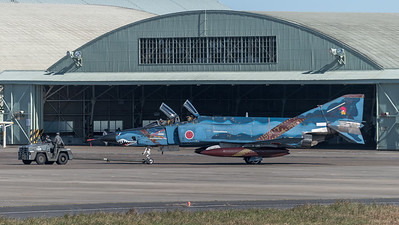 As visible in the short squadron overviews above the number of operating squadrons reduced significantly in the 1990s and finally all remaining squadrons with Phantoms were centralised in Hyakuri (the last relocation was 301st squadron from Nyutabaru in 2016). Whereas the 302nd squadron made its last flights in March 2019 at the end of the Fiscal Year (running in Japan from April till March), the 301st equipped with F-4EJ Kai and 501st equipped with RF-4EJ Kais (with and without radar nose) will continue to fly until March 2020. Based on this framework the airshow in December and its preceding days promised to photograph again Phantoms in-action. 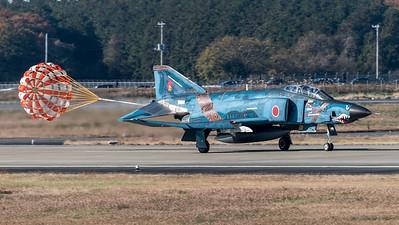 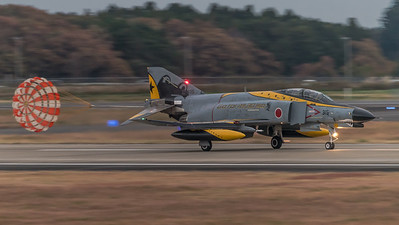 In terms of colour schemes the F-4EJ Kais are all painted in a grey air superiority scheme – except one specially painted aircraft with a design in yellow and the squadron emblem, a frog. The RF-4EJ Kais (e.g. the aircraft with the radar nose) in contrast feature camo schemes, either in different shades of blue (only one aircraft remaining in operations) or in tan and two shades of green. The rebuilt RF-4EJ Kais (e.g. the reconnaissance aircraft without the radar nose) are painted in an again different scheme, combining grey with the two shades of green. 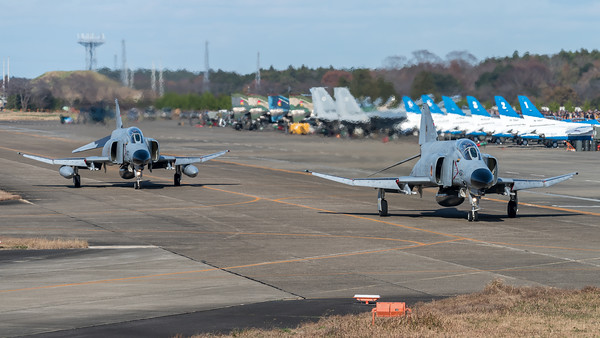 An additional element making the trip even more interesting is a very special photo location at Hyakuri airbase. The area of the base was originally farmland, and although many of the farmers have sold their property to the military, some didn’t want to sell – and became as well active in the anti-military movement in Japan after the war. On the property, they built shrines and so-called “peace towers”, elevated platforms, from where they watch the activity on the base. A dirt road is leading in this U-shaped park, fenced on both sides towards the surrounding base. The owners at one point realised that aviation enthusiasts are delighted about this position, and thus the elevated platforms are now open for a fee for photographers (currently 1500 Yen) – enabling to do perfect photos on the Taxiway, runway and apron / ramp. As the area, especially in the days leading to the airshow, gets crowded, it was opened even during the night – allowing photos of the ramp and the hangars during the dark. 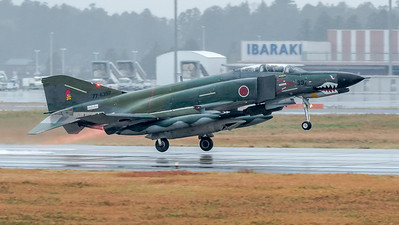 For the special occasion of the approaching retirement both squadrons applied special markings and colours – 301st the already mentioned yellow special marked F-4EJ. 501st instead, already owning different colour schemes due to the camo designs, added a band around the belly for most operational aircraft detailing the years of operations. The approaching end of operations could as well be anticipated as we saw in total 14 or 15 active F-4EJ Kais – and only 7 active RF-4EJ Kais. Luckily a second blue camo RF-4 was still on base, and although not active anymore, was displayed to the public in the static during the show. In the same exhibition, the special painted F-4EJ Kais from the 302nd squadron have to be mentioned. The airframes have been kept in a hangar on base and looked like fresh from the factory. 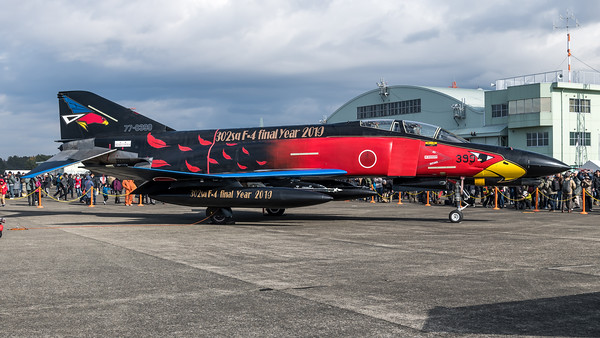 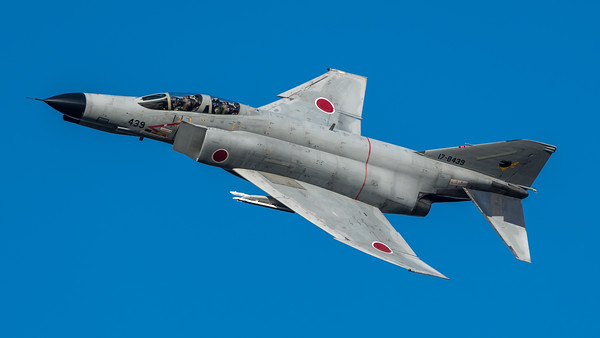 The future of Hyakuri currently foresees the assignment of a squadron of F-2s (unofficially it was said March 2020), presumably a squadron from Misawa, as the base there was chosen as home for the currently newly arriving F-35s. This relocation has its reason in the importance of Hyakuri – the base is responsible for the defence of Tokyo. Thus the located U125s and UH-60Js of the Rescue Wing will not stay alone on the base, fighters will continue to fly from the base and will as well be photographed from aviation enthusiasts around the world from the “peace towers”.